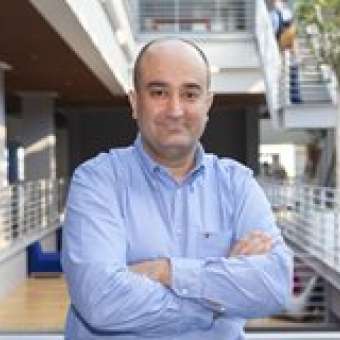 Dr. H. Fatih Uğurdağ, a former veteran of Silicon Valley, received his PhD from Case Western Reserve University (CWRU) in Electrical Engineering & Applied Physics in 1995. He received a BS in Electrical & Electronics Engineering (EEE) as well as a BS in Physics from Bosporus University in 1986. He went to CWRU as a TA and did an MS thesis on machine vision (finished in 1989) and a PhD dissertation on parallel HW design. He worked in the industry in the USA non-stop between 1989-2004 at companies such as GE, GM, Lucent, Juniper, and Nvidia as a machine vision engineer, EDA software developer, and chip designer. Later (2005-2010) he was a faculty member at Bahçeşehir University in the EEE Dept. and then in Computer Engineering. He is also a consultant at Vestek Pixellence R&D group of Vestel in ITU Technopark (since May 2007). Dr. Uğurdağ occasionally serves as an adjunct faculty member at Bosporus University and has ongoing funded research projects jointly conducted with Bosporus. His research interests span the areas of ASIC/SOC/FPGA design/automation, embedded systems, machine vision, educational software/web tools, and intelligent transportation systems.