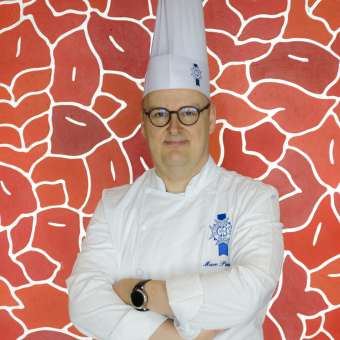 He was born in Eupen, Belgium to a family coming out from the gastronomy. Already assmall boy his father taught him how to dip pralines into Chocolate, this affection for chocolate has remained with him throughout his professional life.

Marc Pauquet began his professional training in a number of different high esteemed establishments such as “Lady Pralines” in Raeren, Belgium and “Café Strauch” in Aachen, Germany and combined his studies with numerous courses offered by professional schools and obtained the Professional Bachelor degree in Pastry and Bakery Art (Meisterbrief).

Chef Marc started his career from managing the “Rathauskonditorei”, a small cafe & confectionery, with a very demanding clientele, including members of the government and the Belgian royal family. He worked as Executive Pastry Chef on MS Arkona” an **** star cruise ship which became not only a chance to develop his pastry skills but also an adventure of his life as he was travelling around the globe.

Afterward, he gained a lot of new experience in Robinson Club Switzerland & Austria before joining 1997 “Divan Pastaneleri” in Istanbul, Turkey. As of 2001, he joined Swissôtel “The Bosphorus” Istanbul as an Executive Pastry Chef.

In January 2005 he accepted the position of “Corporate Pastry Chef & Pastry Production Manager” at Divan; opened the production facilities in Moscow – Russia; developed a part-baked bread and fine bakery assortment and established the “In Bakery” brand; created new gourmet delicacies and a new chocolate - confectionery line for the new Divan Patisserie concept.

Between 2011 and 2019 Chef Marc worked as Technical Adviser for Barry Callebaut the world leading manufactory in chocolate & cocoa; responsible for the Turkish, East Europe, Middle East, and African market. In 2014 Chef Marc opened, for the same group, the “Chocolate Academy” centre Istanbul.