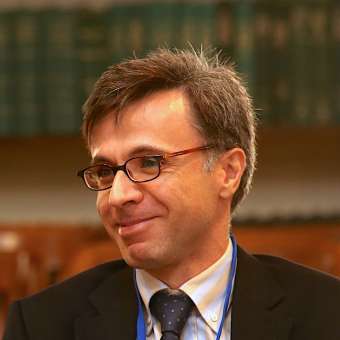 Physics and Astronomy, University of Pittsburgh, 1998

Dr. Akdoğan received his undergraduate degrees in Physics and Electrical Engineering from Boğaziçi University in 1995. He, as a graduate student at the University Pittsburgh, worked on DONUT experiment at the Fermi National Laboratory which made the first direct observation of tau-neutrino in 1998. He received Ph.D. degree in physics from Massachusetts Institute of Technology (MIT) in the area of experimental nuclear physics in 2003 with a thesis titled pion production in the neutron-proton interactions. He continued his research at MIT Laboratory for Nuclear Science as a postdoctoral associate from 2003 to 2004 and contributed to the BLAST program at MIT-Bates Laboratory which studied the electromagnetic structure of the nucleons and deuteron as well as contributing several experiments at LANSCE utilizing neutron beam to study the nucleon-nucleon systems. He was promoted to research scientist position at MIT in 2004. Then, he joined the Department of Physics at Boğaziçi University in 2006 as an assistant professor. He was promoted to associate professor and full professor in 2008 and 2013 respectively. His research area has been primarily in the area of nuclear and particle physics and computational physics. He served as the Dean of Faculty of Arts and Sciences between 2014-2016. Dr. Akdoğan joined Özyeğin University as a fulltime faculty member in 2018.