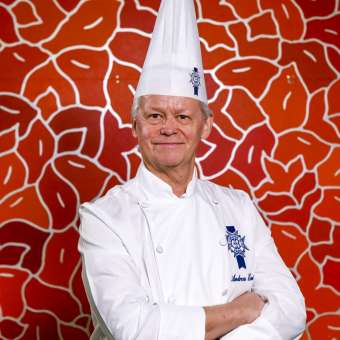 Chef Andreas Erni has started his professional career with an apprenticeship in Switzerland and accomplished the Swiss Diploma. He continued his career and developed professional knowhow in all areas including pastry, working in several top five star hotels in Switzerland such as, Palace Hotel Luzern, Victoria Jungfrau Interlaken, Kulm Hotel Arosa and Bellevue Palace Bern.

Chef Andreas took the opportunity and moved to New York to work at Swissotel and then continued to his career in Switzerland and Malta prior to start working as Executive Sous Chef for the opening of the Swissotel Istanbul in 1990. Chef Andreas worked at the Swissotel Istanbul for 10 years and became a part of numerous tasks including taking in part of the preparing team of the hotel management school, opening and organizing of the Café Suisse, Swiss Chalet and special events. Futhermore, he has been entrusted with the task for the opening of Swissotel Göcek in 2010 and worked for five years.