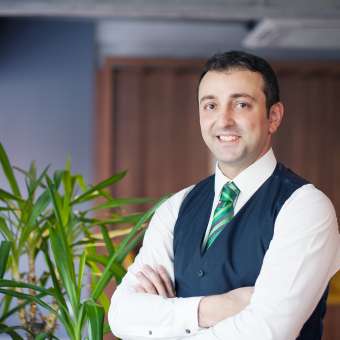 He received B.Sc. degree in industrial engineering from Boğaziçi University. He achieved the master degree in business administration. He co-founded Netiket Bilişim in 2003 and worked as general manager until 2008. He managed projects with leading clients such as Akbank, THY, Tofaş, Tedaş and McKinsey. In addition, he took the role as the project manager of the personnel management software which is still actively used by more than 50 universities in Turkey.

From 2009 to 2012, he worked as the department manager of Bancassurance Product and Campaign Management for Finansbank. He also designed and managed the policy renewals process, implemented the sales of insurance policies through internet channel, focused on need based selling, took the leadership in campaign and process management, played a key role on the "Boosting Penetration and Growth of Sales" project. The incentive model for bancassurance sales teams developed by him gave the lead to the sector. Then he took several managerial roles in finance, sales and transformation program in NN Hayat Emeklilik.