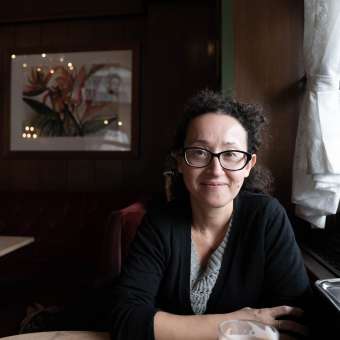 Cultural History of the Late Ottoman Period, Musical Identities in the Age of Nationalisms, History of the Balkans (18th-20 th Centuries), American Evangelism in the Ottoman Empire

Merih Erol is a historian of the late Ottoman Empire, specializing in the study of nationalisms, ethnic and religious identities, and imaginations of the past through musical discourses. In 2009, she received her Ph.D. degree from the Department of History at Boğaziçi University. In 2007, as a doctoral student, she was awarded a DAAD fellowship which took her to Berlin. Later, she was a post-doctoral research associate at the Research Program ‘History of Emotions’ at the Max Planck Institute for Human Development in Berlin. Following her stay in Germany, she spent two years in the US, first as a Hannah Seeger Davis Post-doctoral Research Fellow in Hellenic Studies at Princeton University and then as a Visiting Scholar at Harvard University.

She is the author of the monograph Greek Orthodox Music in Ottoman Istanbul: Nation and Community in the Era of Reform (Bloomington and Indianapolis: Indiana University Press, 2015). Her book demonstrates how music helped the Ottoman Greeks in Istanbul define themselves as a distinct cultural group during a period of transition, both in political and cultural terms. Merih Erol is currently working on a project on the evangelization of the Ottoman Christians by American missionaries during the 19 th century. In her new project, she focuses on various issues related to the conversion of local Christians to Protestantism including the responses of their communal leaders, the cultural impact of American evangelical mission, and the migration and settlement of these evangelical (Protestant) communities during and after WWI.

At Özyeğin University she is teaching a broad range of subjects. The courses which she offers are History of Civilizations (ca.1500-1945), two courses (for international students) on the late Ottoman and modern Turkish history, and another course on the history of the Balkans.