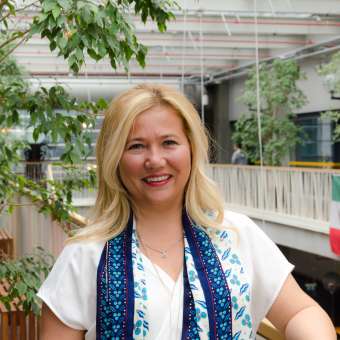 Dr. Özge Samancı obtained her BA (in 1995) and her MA (in 1998) from Boğaziçi University, Department of History and her Ph.D. in History and Civilization from EHESS (Ecole des Hautes Etudes en Sciences Sociales) in Paris in 2009. From 2003 to 2009 she worked as full time and later as part-time instructor at Yeditepe University, Gastronomy and Culinary Arts Department, where she taught food history, and culture. After completing her Ph.D., Dr.Samancı became Assistant Professor in Yeditepe University, at the same department where she taught various subjects about food history, world cuisines and Turkish Cuisine. From 2015 to 2017 she worked at the same university as Associate Professor. Her studies and research focused on the modernization process of Ottoman culinary culture, Ottoman Palace and Istanbul Cuisine and Ottoman-Turkish food historiography. Dr. Samancı, is the member of the editorial board of journals such as Food and History and Yemek ve Kültür. Dr. Samancı is the author of numerous publications about Ottoman- Turkish food culture such as “Flavours of Istanbul” (Istanbul: 2007), “Turkish Cuisine” (Ankara: 2008) and “La Cuisine d’Istanbul au 19e siècle” (France: 2015).