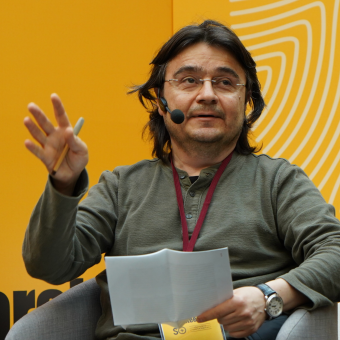 Dr. Ethem Alpaydın obtained his B.Sc. from Boğaziçi University, Department of Computer Engineering in 1987 and Ph.D. in Computer Engineering from Ecole Polytechnique Fédérale de Lausanne in 1990. He started working as assistant professor in the Department of Computer Engineering of Boğaziçi University in 1991 and was appointed associate professor in 1996 and professor in 2002; he retired in January 2019.  He held visiting research positions at University of California, Berkeley in 1991 and 1997, MIT in 1994, IDIAP in 1998, and Technical University of Delft in 2014. He was a Fulbright scholar in 1997 and received the Research Excellence Award from the Boğaziçi University Foundation in 1998 (junior faculty) and 2008 (senior faculty), the Young Scientist Award from the Turkish Academy of Sciences in 2001 and the Scientific Encouragement Award from the Turkish Scientific and Technical Research Council in 2002. He was elected a member of the Science Academy in 2012. His book, Introduction to Machine Learning, was published by the MIT Press in 2004, with its second and third editions in 2008 and 2014, and was translated into Chinese and German; its Turkish edition was published in 2011. Another book, Machine Learning: The New AI, was published by the MIT Press in 2016 and since then was translated into Japanese, Russian, and Korean. His research focuses on artificial intelligence and machine learning.