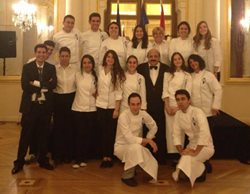 knowledge of food culture of the Özyeğin University students. Our club was founded with the mission of introducing and endearing world cuisines starting with Turkish cuisine.

Since Gastronomy and Culinary Arts Department is one of the new programs of the university, we did not have such a club before. As the first gastronomy students and future executive chefs, we founded this club in 2013. I was the vice president of the club in the first year and this year I had a chance to be the president of the club. Our club was founded for the students who are interested in cooking, learning about Turkish cuisine and international cuisines, discovering new dishes from different countries and practicing them.

We have organized several events in the first year and we are planning to organize more events in the following years. Undertaking the catering event of the Republic Day Ball with the contribution of our club members from different faculties of our school, serving to the guests in French Palace in Istanbul during a special event, organizing a trip to an organic farm and organizing conferences with successful executive chefs and restaurant owners were some of our activities in 2013-2014 academic year.

Being an active member of our club requires leadership skills, research capabilities, taking responsibility, thinking critically and acting accordingly, networking and organizing events. Our active members can improve their skills by participating at our events as volunteers. We aim to help our members improve their skills as well as help them learn about the gastronomy world. Since we are going to organize our events in collaboration with people from the industry, our members will have the chance to liaise with those people. So, the students who are planning to have their major in gastronomy and culinary arts will have a chance to be a part of the sector by joining OzU Cuisine.

Anyone who is interested in gastronomy either professionally or as a hobby is welcome to join our club.